At least that’s what the shortened headline on the Mediaite website reads, which I thought was pretty funny… 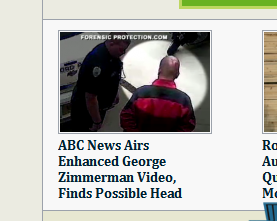 Incidentally, that’s more than ABC News was able to find in their original video, in which they pretty much found nothing of note.
The full headline ended with the word ‘gash’.  Incidentally, the article was not written by Tommy Christopher, who heavily pushed the original ABC News video, even running it again at the end of a post which mocked the Daily Caller for enhancing the video and finding a head wound three days before ABC decided to double check their information.
Correcting misinformation isn’t one of Christopher’s strong suits.
Tags
Funny George Zimmerman Trayvon Martin

Happy Thanksgiving to All! Except for These Losers