An 11-year-old Donald Trump fan gained notoriety earlier this week when he asked vice-presidential nominee Mike Pence a question about his role in the campaign.

Earlier this week, he went on MSNBC to set the liberal media straight after they tried to put their spin on his question.

Matthew Schricker, a sixth grader at Cary Academy in North Carolina, got to question Pence at a recent town hall rally.

“I’ve been noticing that you’ve been softening up on Mr. Trump’s policies and words and is this going to be your role in the administration?” Matthew asked Pence.

It was a well-reasoned question, but Matthew wasn’t too happy about the media portraying it as tough or challenging.

Fast forward to today when MSNBC’s Chris Jansing introduced him to her show using that same angle that he had challenged Pence on Trump.

Jansing led into the segment by referring to Schricker as “One concerned citizen – an 11-year-old boy who challenged his (Pence’s) loyalty at a rally in North Carolina yesterday.”

Schricker told Jansing, “It was not — I was not meaning for it to be hostile. As you said before, I was challenging him. No, I was not.”

In four words, the young man halted Jansing’s and the media’s biased interpretation of his question.

Eleven-year-old Matthew Schricker, who has been plastered across TV screens and various websites since asking Donald Trump’s vice presidential pick Gov. Mike Pence a question at a campaign rally, shut down MSNBC’s Chris Jansing on Friday blasting her for how she was framing the story.

On “MSNBC Live,” Jansing began the interview asking, “Was that a question that you came up with, did your mom help you, and what did you think about his answer?”

“It was a question that I came up with,” Schricker replied. “And I was very satisfied by his answer. And it was not — I was not meaning for it to be hostile. As you said before, I was challenging him. No, I was not.”

“I was totally just asking him to see if he was — if Mr. Trump was approving. I was not trying to be mean to him or challenging him or trying to bait him like many websites who are saying I was grilling him. I was not doing anything to offend him or the Trump campaign,” Schricker said.

Jansing ended the segment by saying “I hope you don’t feel we misrepresented you in any way.”

Check out the confrontation below …

Next post Who’s Hillary’s Husband? She Seems to Forget During Her Speech 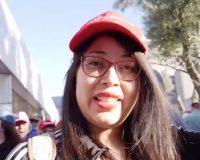 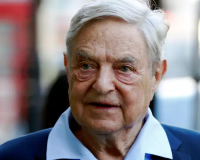